The Best Hat Episodes on Seinfeld!

The Best Hat Episodes on Seinfeld!

In light of the recent Seinfeld mini-reunion, it's nearly impossible for fans to avoid bringing up their favorite episodes and moments from the show. Whether it was the bizarre, the frustrating, or the just plain funny, Seinfeld captured the quirks of life and human behavior like no show had ever done before and, arguably, ever since. We love the fact that some of the most lasting images and scenes from the show include hats as part of the subject matter! Have you seen these episodes? 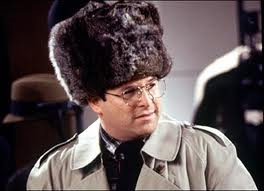 Elaine is given access to the J. Peterman bank account while she's acting as the company's temporary president. She makes several ridiculous and expensive purchases while in charge. One such purchase was the Russian sable hat seen above, which she purchases for George as a bit of a gag. George takes a liking to the saleswoman who sold them the hat, and eventually goes on a date with her. In true Costanza fashion, he has a deceptive plan to guarantee that he'll get to see the woman again. He leaves the hat behind in her apartment so that he'll have a perfect excuse to come back because he has some doubt that she'll legitimately agree to a second date with him. When it's discovered that Elaine spent an outrageous amount of money on the J. Peterman expense account, she's forced to get the hat back or justify it as a business expense. When George tries to return to the saleswoman's apartment, she insists that he didn't leave the hat at her house. This puts a wrench in his plan to get back in her apartment and causes a huge headache for Elaine. 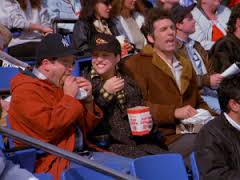 The painted portrait of Kramer and Nina's plagiarized letter.

George gets tickets to a Yankees game from Jerry's girlfriend (whose father is the Yankees' accountant). He takes both Elaine and Kramer to the game. Elaine, being from Maryland, is an Orioles fan and wears her favorite Orioles cap to the game. She gets in a confrontation with security when they try to force her to take off the cap because she's in the owner's box. Things get really interesting when Elaine's boss reveals that he has the same accountant as the Yankees, and has procured owner's box tickets to the next Yankees game. He knows that a young woman got in a scuffle over wearing an Orioles cap at the last game, but doesn't realize that it was Elaine. He asks Elaine to accompany him to the game and wear her Orioles cap as a joke. She is unable to get out of the situation, and things get chaotic at the game! 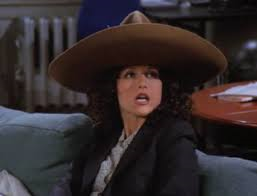 Kramer getting beat up by the kids from his karate class and references to Star Trek II: The Wrath of Khan/Star Trek III: The Return of Spock.

Two words: urban...sombrero. When J. Peterman has a nervous breakdown, he flees the company and puts Elaine in charge. With the encouragement of Kramer, she decides to put the Urban Sombrero on the cover of the next catalog. While Elaine confidently fancies herself a pioneer of fashion, the truth is that the Urban Sombrero is really just a hideously weird idea that is doomed to fail. The Urban Sombrero is easily the most recognizable hat moment on the show -and something no Seinfeld fan will ever forget.

P.S. Check out Pharrel's unusual hat that he wore at last week's Grammy celebration. We'd like to think he got his hands on some old urban sombreros, trimmed down the brim, and manipulated the crown into a stylishly lumpy shape. Check out the hats.com version of Pharrell's Hat! Only $29.99!